I predict an Eagles vs Ravens, Battle of the Birds 2013, matchup for Super Bowl XLVII. On a side note, why does the Super Bowl use roman numerals? Why don't they just use numbers, say like Super Bowl 47 rather than XLVII. Newsflash: it's 2012 and nobody knows how to read roman numerals without searching on google.

I'm picking the Eagles because, well, it feels like destiny. Last year's dream team disappointed but is coming into the 2012 season a little underrated. The Eagles seemed to finally start clicking at the end of last year's season. They finished on a four game winning streak, but it was just a little too late. And they released Vince Young, automatically making them at least 10 times better than last season.

Offensively, I am expecting big things from Mike "I hope I don't break my ribs" Vick. If he stays healthy he is a top-5 quarterback. Shady McCoy is money, enough said. And watch out for DeSean Jackson this season. Now that he got paid I think he will revert to the old electrifying DeSean Jackson ways. Heck, maybe he'll even run a route across the middle this year.

The Ravens literally dropped the ball last year. They were a Lee Evans catch away from being in the Super Bowl. Now don't get me wrong, I was elated when Lee Evans dropped that touchdown catch putting my beloved Patriots into the Super Bowl, but it is/was clear that the Ravens are a Super Bowl caliber team.

Offensively, I think the Ravens are going to breakout this season. Ray Rice is widely considered a top three, if not the best, running back in the league, but this is going to be a breakout season for Joe Flacco. I think the Ravens are going to let Flacco sling it much more to guys like Torrey Smith deep down the field rather than restricting Flacco to short dink and dunk passes.

Defensively, the Ravens are tremendous in the red-zone-- they are so good at preventing teams from scoring touchdowns and forcing them to kick field goals when in the red-zone. Even with the loss of Suggs and the aging Reed and Lewis, I think the Ravens defense will once again be frightening.

The Eagles over the Ravens to win the Super Bowl. Over/Under 95 percent chance DeSean Jackson gets arrested within 24 hours of winning a Super Bowl? I am taking the over. 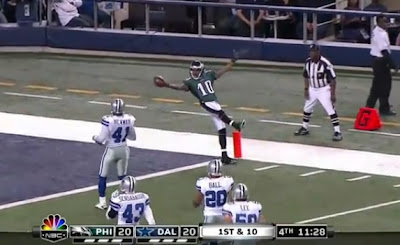