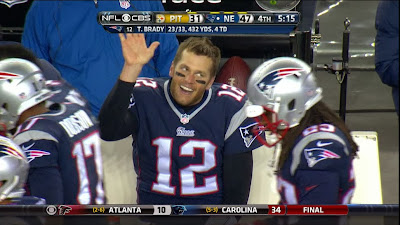 Pats win! The Pats offense finally looked like, well, a real NFL offense. Brady and his receivers were clicking, FINALLY. It was nice to see Tom completing passes longer than 5 yards, Dobson actually holding on to passes that hit his hands, and Gronk spiking balls into the stratosphere again. I am not sure if this improved offensive performance was a result of the offensive unit finally starting to mesh, or if it was because the Steelers are truly awful. Or, maybe, and more likely, it was a combination of both.

While the offense looked good and a win is a plus any day, the Pats defense is still a major concern. Of course when you are missing the best defensive player at every level of your defense (Wilfork upfront, Mayo in the middle, and Talib in the back) you will likely struggle, but this cast of characters made the Steelers offense, particularly their rushing attack, look pretty awesome during stretches of the game. The Steelers might be the worst team in the NFL right now, but their offense looked pretty good against the patched-together Patriots defense.

It's nice to see the Patriots offense finally start rolling again, but this defense really worries me. Lets hope the Pats offense can continue to mesh enough to cover the holes on defense that have been left from losing 2 pro-bowlers for the season and having another perennially injured.