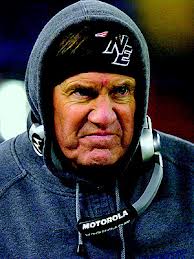 Let me preface this by saying that some of the Pullitzer Prize caliber material you will read on this blog is going to have a New England bias. I was born and bred in Massachusetts, so this bias is just part of my DNA. Basically, there is a 100 percent chance the Patriots win the Super Bowl this year.

Also, I am a big fan of capital letters. Your eyes aren't deceiving you and I am not writing in caps in various sections of this blog-- it's just the font. DEAL WITH IT.
Posted by thegp at 10:07 AM